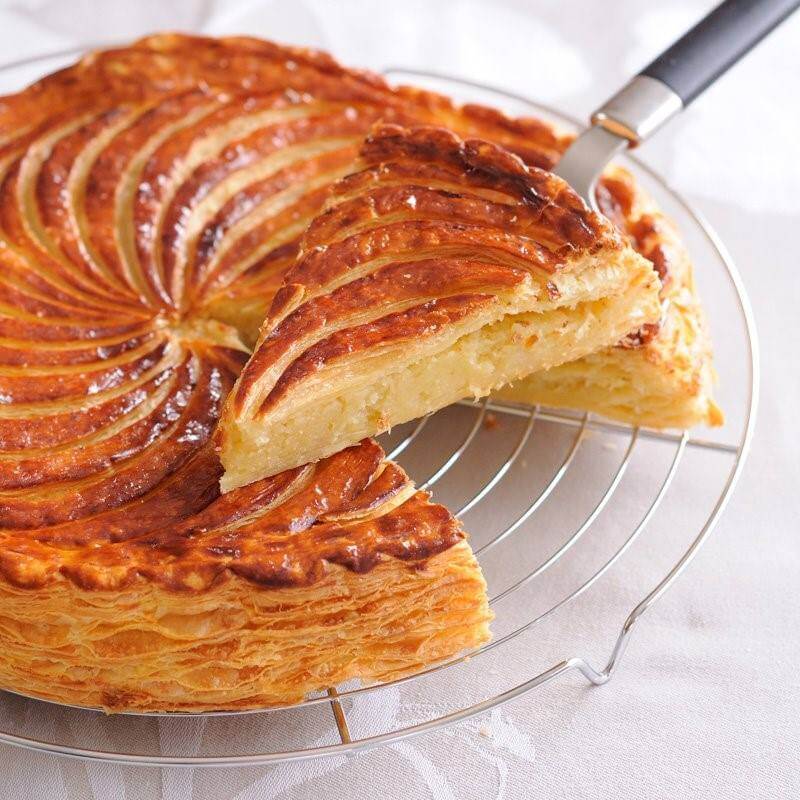 Cake of the Kings Frangipane

In January the flagship patisserie is the galette des Rois. Whether puff pastry, brioche, frangipane based, candied fruit, small and large like to gather around this pastry.

The Cake of Kings is consumed on the occasion of the epiphany which is celebrated in the Christian calendar on January 6th. This Christian festival celebrates the visit of the three Magi (Gaspard, Balthazar and Melchior) to the child Jesus.

On the 6th of January falling regularly during the week, a reform has transferred the date to the second Sunday following Christmas, that is, almost systematically, on the first Sunday of January.

The Epiphany comes from the Greek manifestation or apparition.

The custom of the cake of the King, the day of the epiphany is 100% French (except in Belgium).

Symbol of sharing and gluttony, the origin of the galette of the Kings goes back very far before the birth of Jesus and results from a mixture of pagan and Christian traditions.

History of the Cake of the King:

On this occasion, the Romans designated a slave (or condemned to death) as “King of a day”. The lucky chosen could then command to eat anything that made him envy before being executed the next day. During these festivals, at the time of the winter solstice, masters and slaves were on an equal footing and everyone ate at the same table. Excess was allowed and it was customary to offer cakes to his entourage. A tradition which, in the Middle Ages, became that of the “cake of the kings”. The round and golden form of the Kings’ Cake refers to the sun and therefore to the worship of Saturnalia, also linked to the solstice, winter as well as summer.

As for the bean, its origin also dates from these festivals during the Roman Empire. It was customary in ancient Rome to draw lots for the king by a black or white token. A legend also reports another origin of the bean: the legend of Peau d’Ass, inspired by the tale of Charles Perrault. Thus, by forgetting his ring in a cake destined for the prince, Donkey-skin would have inspired this strange custom. At the end of the 4th century, the Church banned these pagan festivals and replaced them with a religious celebration. From the 5th century onwards, the Church attached considerable importance to this tradition which was held on the day of the Epiphany, on January 6th. The Epiphany is a Christian festival that commemorates the visit of three Magi, Melchior, Gaspard and Balthazar who brought 3 presents to the baby Jesus: myrrh, incense and gold.

The differents Cake of the Kings:

It was Marie de Medicis, the second wife of Henri IV who, on leaving Italy, had the recipe for a cream of almond powder, elaborated by the cook of his nearest suitor, Count Frangipani . The recipe was then validated at the court of France.

The Cake of the King Frangipane is eaten more in the North of France. This is the recipe for the galette des Rois frangipane which I will share my recipe.

Today we find on the Internet, innumerable recipes of cake of Kings resembling those of origins but whose perfume changes. Ranging from the addition of chocolate or coconut, to the addition of rum or using fruits such as apple or pear.

Tasting of the Cake of the Kings:

In France, the tradition is that we share the galette des Rois in as many parts as guests, plus one. The latter, called “part of the good God”, “part of the Virgin” or “part of the Poor”, is destined for the first poor who presents himself at home.

It is the youngest of the guests, hidden under the table, the part of each guest. The one who pulls the bean, carries a paper crown as a symbol and must designate his King or Queen.

The Cake of the Kings Frangipane is tasted warm with a cider.

Cake of the Kings Frangipane

For puff pastry you can either buy it on the market or make it yourself.